One of the best known areas of France, the Dordogne region is located in the South–West of France. It is part of the Aquitaine region (now Nouvelle Aquitaine, which includes Poitou-Charentes and Limousin). The department has been popular with holidaymakers and tourists, as well as house buyers for many years. British, American and Dutch have been buying properties in or near the Dordogne region decade.

The enduring appeal of the Dordogne – particularly for Brits – is no surprise once you visit. It has the beauty of North Wales or the Lake District but with the climate of South-West France, complete with utterly stunning bastide (fortified) and medieval villages and towns. Quiet, peaceful countryside for hundreds of miles but within easy reach of international airports.

The Dordogne region of France is bursting with history. The area was one of the focal points of the Hundred Years’ War, with a large number of châteaux and bastide towns and villages along the Dordogne River. The Dordogne is also known for its’ rich gastronomy. You will enjoy regional specialities such as duck confit (or rillettes), foie gras and truffles.

The departmental capital of the Dordogne is Périgueux, in the Périgord Vert (Green Perigord). The town has strong roots in Roman times, which you can see in the remains of a Roman amphitheatre and a Roman villa, as well as evidence of medieval and renaissance architecture. The glorious Saint-Front cathedral sits at the heart of Périgueux. It is a well-trodden stop for tired pilgrims on the religious Saint-Jacques de Compostelle route.

One of the most popular tourist attractions in the Dordogne is the medieval town of Sarlat, France. The full name of the town is Sarlat-la-Canéda. It has more listed buildings per square metre than anywhere else in Europe – and if you’ve travelled across Europe you’ll know that is an impressive statistic! If you’re visiting Sarlat make sure you’re there on a Saturday for the huge morning market. Alternatively there is a cracking indoor market in the former church of Sainte-Marie. Spend some time here, wander down the alleyways, mooch in the windows of the unique shops and got lost in time. 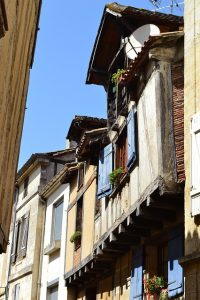 Further to the West, along the Dordogne River, is the quiet medieval town of Bergerac. The town is hugely popular with both the French and the British for holidays and second homes. The old town is well worth investing some time, with pretty streets and market squares to explore. There is, of course, a statue of literary and cinematic hero Cyrano de Bergerac (perfect for selfies!) and the quai is a lovely place for a walk or picnic. The area surrounding the town and along the River are dotted with Bergeracois vineyards and manor houses. 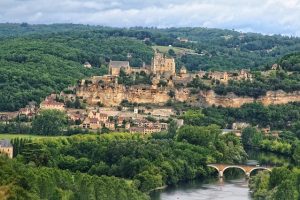 Some 150-plus villages have been classified as the prettiest in France – ‘Les Plus Beaux Villages de France’ – and 10 of them are in the Dordogne! Definitely worth a visit are La Roque-Gageac, right on the banks of the River Dordogne and with steep cliffs behind; Monpazier, a bastide village which has an unbelievable 32 listed buildings; Domme, a stunning village set on a cliff with views down the Dordogne valley. Beynac-et-Cazenac is another ‘plus beaux village’, very popular in the summer, with winding cobbled streets, cute artisanal shops and a brilliant fortified hilltop chateau to wander around. 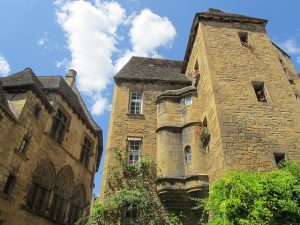 The medieval town of Sarlat

The Vézère valley, to the North of Sarlat is home to one of the Dordogne’s most historic and famous attractions. A UNESCO World Heritage Site, the decorated caves of Lascaux are a unique representation of the history of the region. A replica of the caves is open to the public, but funnily enough the real caves are off limits! 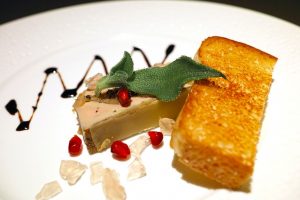 The French are passionate about their food and wine, and never more so than in the Dordogne. With markets in every town and village of differing sizes, you will be spoilt for choice of regional delicacies, with confit de canard, truffles and walnuts being incredibly popular. The best markets can be found in some of the larger towns – and notably where there are lots of tourists – Sarlat, Bergerac and Périgueux have some huge markets where you can lose time! When eating out in the Dordogne, expect to eat duck. A lot of duck. You’ll also find foie gras a staple on most menus as a starter, which is a dish that tends to horrify some foreigners (particularly animal lovers) but it is nonetheless delicious with some caramelised pears and a sweet glass of wine.

For wine lovers, the Dordogne offers plenty of choice. Maybe not as well-known as its’ neighbouring Bordeaux wines, Bergerac wines are delicious and there are lots of vineyards to the south of the department along the River, where the climate is milder. Wines you may have heard of include Pécharmant, Monbazillac and Côtes de Bergerac. The local wine producers are well worth a visit and prospective customers will always be welcome for a tasting session! 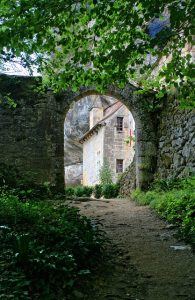 Yes, the Dordogne region of France has been popular with British expats and holiday home owners, but that doesn’t mean its property prices are beyond the reach of ordinary mortals. In fact, some of our clients have been surprised when the property they fall in love with has a ‘24’ postcode and is also in their price-range! The average property price across the department is around €118,000, as compared to the average property price in France, which comes in at around €155,000. In the Nouvelle Aquitaine region, funnily enough, the Dordogne is one of the cheaper departments compared to Lot et Garonne and Gironde! That said, the Dordogne is a pretty sizeable department so prices do vary from the tourist hotspots along the River Dordogne around Sarlat up to the more rural Northern Périgord Vert, which borders Haute Vienne in the Limousin. There could be a €20k to €30k difference between an equivalent property in these two areas.

The Dordogne region of France offers plenty of choice for the buyer looking for the quintessentially French property – pretty stone cottage, wooden beams, shutters, garden and outbuildings. The Dordogne is incredibly popular with international tourists, so a well-run, clean and competitively-priced B&B or Gite, well-marketed online and locally, will always have business!

The South-West France equivalent of a turret or tower is the pigeonnier (dovecote), which is an attractive feature for properties and commands a premium as they are so pretty.

Getting to the Dordogne

The largest airport to access the Dordogne region is Bordeaux. There are smaller airports in Limoges, Bergerac and Brive Vallée de la Dordogne, all of which have regular flights to the UK and elsewhere in France. In terms of train access, the high-speed TGV comes into Bordeaux and also Angoulême, to the North of the department. For the drivers, the department is well-connected via autoroutes, with the A89 cutting across the bottom of the department from Bordeaux to Lyon. To the West and East of the department are the A10 and A20, with good access to the North and South of the country.